From Saul to Paul: The drastic need for a changed management style

From Saul to Paul: The drastic need for a changed management style

Ahead of our Chief Data & Analytics Officer, Europe event. Norman Stuertz, CDO , Credit Suisse, who will be speaking at the event, wanted to share some key thoughts on change within the data space.

Part 1: The need for speed

Digitalization is the buzz-word of the past two years. No reason to talk about this, the business models, the opportunities and threats have been eluded on in countless articles, forums and conferences.

Having been on some conferences this year which all touched the digitalization topic, I noted three things.

Those who understand the need for speed wonder how to bring the speed into the enterprise where traditional work forms dominate (the “two (or multi speed) challenge”). In that sense I’d like so share a few thoughts.

In a first step I’d like to confirm the point that things are faster now with some evident observations.

In the next part I’d then reason a bit more on complexity and what it really means. That will lead us to the insight that a drastic change in management style is needed.

The last part would then be about how to concretely adopt the management style. Most of the thoughts are influenced by Paul Diamandis, Ray Kurzweil, Jurgen Appelo and own experiences.

Let’s recap on the fact of speedier economic cycle times using the history of development of processing capacity in a computer.

Moving on to 2012, NVIDIA’s GPU had a transistor count of 7.1 billion transistors, a gate length of 28 nms and a speed of 7 GHz. Today, the cost of a transistor is approximately USD .0000001. The green line in the “Intel CPU Trends” graph shows the non-linear tranistor growth nicely. 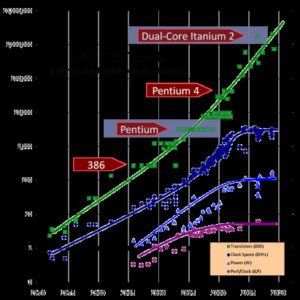 This is very well known as Moore’s law in which the overall processing power, specifically the number of transistors on an affordable CPU would double every two years. Of course we now see that law coming to an end, but wait there is more to it later.

A similar development to CPUs, but with strong focus on diminishing cost can be seen with data storage. The first hard drive back in 1995 could store 5 MB of data. In 2005 a micro SD with 128 Mega-Byte came out, in 2014 with 128 Giga-Byte.

So things are really getting faster. In this context the term „non-linear“ or „exponential growth“ are often heard. Evidently this exponential growth happens in almost every economical field, the progress on 3D printing, industry 4.0 implications just to be high level buzz words.

Is this going to stay this way? Well, I have no crystal ball, but there is some kind of answer. The law of accelerating returns of Ray Kurzweil. This law states that if a specific method or approach to solve a problem, (e.g., shrinking transistors on an integrated circuit as an approach to making more powerful computers) exhausts its potential, a new paradigm/method/approach will emerge which enables exponential growth to continue. [http://www.kurzweilai.net/the-law-of-accelerating-returns]

Taking again the example computation power, we can observe that it has gone through five different paradigms of exponential growth.

Remember we said that Moore’s Law is now faltering a few paragraphs above. Now read this: As the 2 – 3 nanometer limit, where features are just 10 atoms across will be reached soon researchers look for alternatives. Stack or Graphene and carbon nanotubes are among the most promising solutions to overcome the limits on traditional circuitery on CPUs. Further, NVIDIA sees the potential in parallel processing for the future of KI. So as we can see the next curve of technology development already kicks in and the non-linear story continues.

Once a given technology reaches it’s limit, a new technology emerges and the speed of development increases

The foreseeable impact of the non-linear paradigm in business and technology is that it leaves us less and less time to go through the typical life-cycle of products and services.

To underly the hypothesis let’s look a little bit more at scientific facts. According to Richard Forster from Yale, the average lifespan of a company listed in the S&P 500 has significantly decreased.

The last point I try to make for the still unconvinced is showing a graph which shows the number of unicorns (very promising start-ups with very high capitalization). Even in the comparatively dynamic world of start-ups the number of companies appearing on the market, drastically increased over the past 2 years.

At the same time as this need for speed arises, we find that things are more and more complicated. Or some say complex. But what is the real background here? Is that just the gutt-feeling of middle-aged, late Gen-X managers or is there something to it? Let’s look at that in the next part of this analysis.

[Credits: Own research resp. non-linear / exponential growth IP taking from Peter H. Diamandis http://www.diamandis.com/blog/ and from Ray Kurzweil http://www.kurzweilai.net/the-law-of-accelerating-returns. Thanks to Wan Zhang and Thomas Mühlematter in research and preparing the material]